The Society’s new programme began on 17th February with an excellent talk from Carol Kemp of Radcliffe Heritage Society. Her topic was “Digging and delving at Radcliffe Hall”. Radcliffe Hall is the ancient manorial centre of the town including Radcliffe Tower,the Church and the Tithebarn. Carol knows her subject inside and out and her infectious, inspirational enthusiasm shone through her presentation.

Carol was born and brought up in the area. She was first drawn into family tree research but discovered six generations of her family had lived in the Radcliffe Hall area. She moved into research in the neighbourhood. Carol joined the Dig Greater Manchester campaign spearheaded by Salford University. They trained her in proper archaeological techniques and she has taken part in the recent digs in the area.

The foundations of the old hall that joined onto the Tower have been found but threw up two new conundrums – the walls are on a different alignment to the existing Tower and 12th century floor tiles have been found ( the Tower was thought to date from much later in 1403). She told us that many of the important discoveries on the Radcliffe digs have been, frustratingly, made on the final day when they couldn’t be immediately pursued.

Carol’s group investigated worker’s housing in terrace streets around the site and were able to pinpoint occupiers of the houses in the census. They also excavated “tipper toilets” which were an innovation in the late Victorian period. Carol remembered them from her childhood and had been nervous of their sudden flushing. A fine example of  a tipper toilet has been taken off to the museum in Manchester. Carol located the remains of the old National School of Radcliffe. She has also researched in great detail the Bealey family and their bleach and dyeworks which dominated the Dumers Lane area.

“Radcliffe Cross” was a local name despite there being no sign of a cross today. Carol reasoned that there must have been a cross at some point and went in search of it. She found part of a stone cross in the library basement with a cross clearly carved on it. It is now on display in Radcliffe Library. The tooling on the stone suggests a 15th Century date for it.

Carol’s talk was well supported by slides and wonderful maps. She said she loved maps and that showed!

We look forward to hearing more about the Radcliffe Project and hopefully taking part in it. 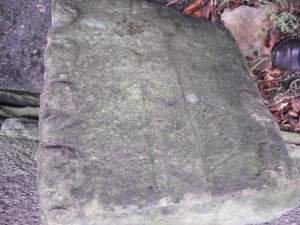