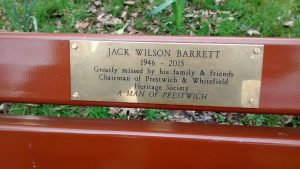 We are still missing Jack after his sudden and unexpected death last September. He has left a huge hole in the Society which is proving difficult to fill.

His passion for Prestwich and its heritage was the driving force of the Society over the last nine years. He championed the Timeline and Museum in the Library and won the Society a number of grants for projects and equipment.

Two memorials have been established to him. Amanda has commissioned a plaque to put on one of the new benches in the Flower Park. Alan Wentworth attached the plaque in a skilful manner. The bench was officially inaugrated by a party of family ( Gerry and Jenny) and friends of Jack. We met at the bench on the morning of Sunday 5th June. We toasted Jack and reminisced about him. And took turns to sit on the bench of course.

Everyone agreed that the description of Jack on the bench, “A Man of Prestwich” , was trully appropriate.

Tom, the Prestwich & Whitefield Heritage Society Patron at the Church Inn, has put a display case together in Jack’s memory. It contains many items that Jack uncovered in his digs around the Inn. Jack’s name is in attractive calligraphy. Thank you Tom and thank you Amanda.

Check out the bench if you are in the Flower Garden. Jack’s ashes have also been scattered there.

Pictures :
1. the bench
2. The display in the Church Inn.