Armed bank robbery, shot fired in the bank, car chase, armed police in pursuit, car abandoned, chase on foot, more shots fired, and finally robbers escape plus a possible terrorist connection ; is this a plot from a television cop show? No, this happened in Prestwich nearly 90 years ago.

On the 18th July 1922 four men hired a taxi outside Victoria station and asked the driver to go to Heaton Park – specifically the Polefield branch of the Manchester and Liverpool District Bank. When they arrived one man pointed a revolver at the driver and the other 3 entered the bank. A shot was heard, and the 3 men ran out with their ill gotten gains: £200 (about £7500 in todays money). Amazingly a crowd of bystanders threw rocks. Mysteriously a delivery van from Hiltons bakery gave chase and somehow an armed policeman was on board.

The chase went up Bury Old Rd but at Besses Junction did a U turn into Bury New Rd. They must have reached the dizzy speed of 20mph before the thieves abandoned the vehicle near The Red Lion. The chasing van crashed and the pursuers grabbed the abandoned taxi and followed the thieves as far as Deyne Ave. 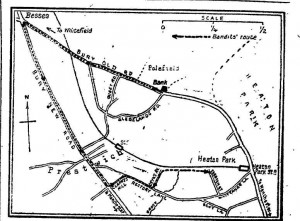 A chase on foot followed towards Heaton Park during which shots were fired by the robbers and the police. The robbers escaped and I am still searching for follow up information. This was reported in The Manchester Guardian of 19 July 1922.

The report mentioned that this was probably the first armed bank robbery with a car getaway on the English mainland. It is thought though that this was the “modus operandi” of the IRA and 1920/22 had seen an upsurge of their violence in Manchester.

It also seems strange to me that an armed policeman seemingly appeared from nowhere.

Research into this affair is ongoing. Watch this space.