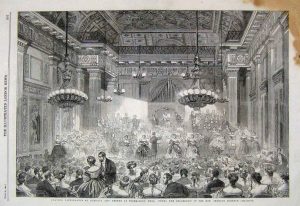 Above : a Smoking Party given by the Wandering Minstrels with Sim Egerton conducting.

Our August meeting was on Wednesday August 9th. A talk concerning Seymour Egerton 4th Earl of Wilton and the Wandering Minstrels. Our member Andrew Walker has made an extensive study of the Wandering Minstrels. Seymour was the conductor of this amateur orchestra drawn from the ranks of the aristocracy and the higher ranks of the military. Over a period of 38 years they raised £16,000 for charitable causes. They also played the opening concert at the newly completed Albert Hall in London in February 1871. They were very famous in their time.
Andrew was ably assisted by Dorothy.
Seymour, known as “Sim” was the second son of the 2nd Earl of Wilton. Sim founded the Wandering Minstrels, amateur musicians drawn from the great and the good, who toured the country giving concerts for charity. Sim was the conductor and also wrote some of the pieces they performed. They were active in the 1860s,70s and 80s. Many of their regular performances took the form of “Smoking Concerts”.
Sim was an accomplished musician and a friend of Sir Arthur Sullivan of G & S fame. The “Wandering Minstrel” song in the Mikado might have been inspired by Sim’s group.
The Wandering Minstrels performed several times in the neighbourhood – at Heaton Hall and St. Margaret’s School. One of the pictures Andrew passed around showed the Minstrels at Heaton Hall with their patron, the 2nd Earl ( Sim’s father). Also in the picture were Sim’s three sisters and his brother Arthur (on drums). A musical family !
Sim’s personal life was not that happy. He married Laura Russell in the early 1860s and they had two children. But Laura took off with one of their friends – Sir Frederick Johnstone and the pair became part of the fashionable Marlborough House Set. Andrew also told us that Laura was a keen fisherwoman and spent time with Sir Fred fishing in the Caribbean.
Sim went bankrupt and went to Tasmania for several years where he was also engaged in giving Concerts. He returned to Europe, however, and built a retreat in Bavaria. Sim inherited the Title, Earl of Wilton in 1885 after the death of his brother, Arthur, of throat cancer. He seems to have spent a lot of time at Heaton Hall after that and died suddenly there, aged 59, in 1898. Poor Sim seems to have had mental issues in the last decades of his life.
The Wandering Minstrel story came to light recently when a curator at the British Museum found three boxes stuffed full of memorabilia about them and gave a radio talk. Andrew passed round excellent pictures from one of these albums. The radio talk is online at …
http://www.bbc.co.uk/programmes/b01lyb4k
David thanked Andrew and Amanda told us that the Society meetings had to switch from Wednesdays to Tuesdays from now on.